Keep Austin Weird, amiright? I actually heard this slogan first through Keep Portland Weird but upon some research, it was, in fact, Austin where it originated. It first started in order to bring awareness to supporting local businesses and establishments but Austin is definitely weird so I think it’s developed into an appreciation for all these odd and curious. On my inaugural visit to Austin, I tried to fit in as many spots as possible in order to find the best weird things to do in Austin.

Museum of the Weird 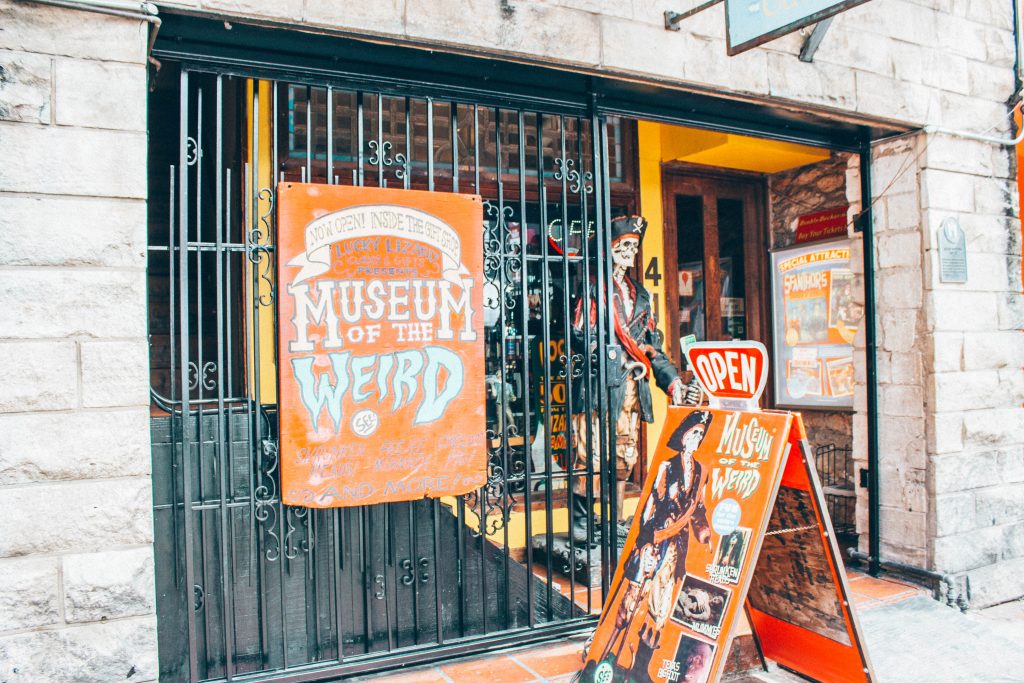 The Museum of the Weird really isn’t hiding under any facades with that name, but it is legitimately one of the weirdest museums I’ve ever been to. What started as a gift shop called Lucky Lizard Curios & Gifts soon grew into something much bigger and perhaps weirder.

The back part of the shop was used for the more unusual items such as suits of armor, shrunken heads, and so on. Eventually, though they decided not to sell these rare items and instead decided to start sharing this unusual collection and thus the museum was born.

The Museum of the Weird is one of the last true dime museums in the United States. For those like me – In early 19th-century America, dime museums were popular attractions attracting that name due to the admission costing $.10. These museums were eccentric collections of the bizarre: stuffed two-headed calves, petrified mummies, and dragon fossils. Dime museums were also the birthplace of the sideshow.

At the Museum of the Weird in Austin, you’ll find all of these same types of oddities – authentic freak animals, mummies, fiji mermaids, shrunken heads, life-size was figurines, and more – are they real or a fabrication? You’ll have to visit to decide.

In addition to the artifacts, you will also get to witness a true sideshow – scissor swallowing, electrocuting, pulling things through the nose – sideshow.

See also  9 Places You Can Enjoy Christmas All Year Round 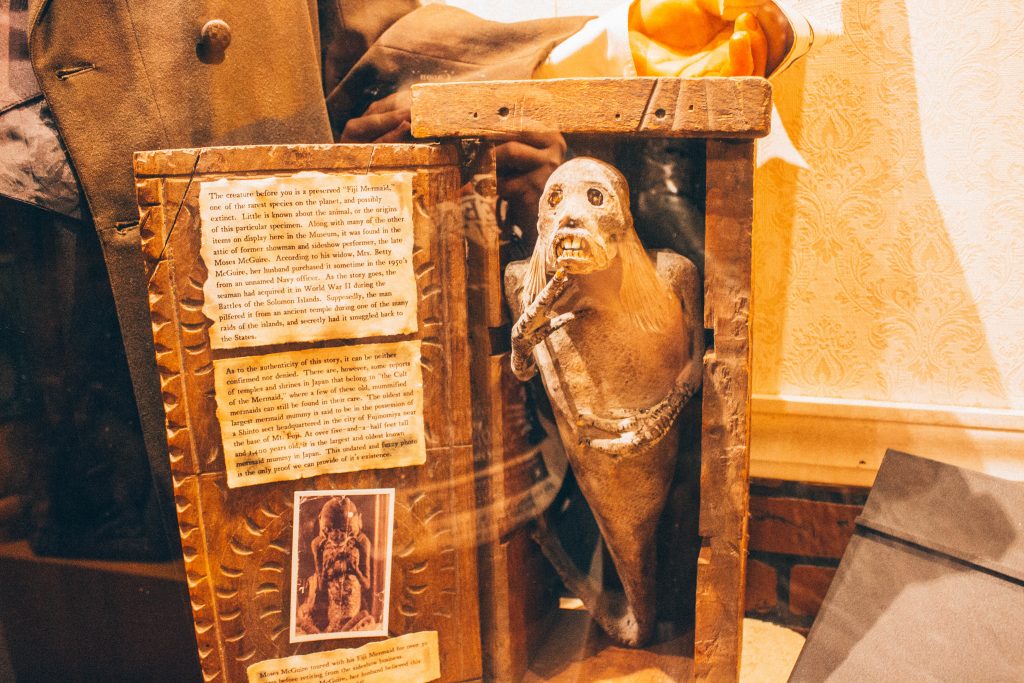 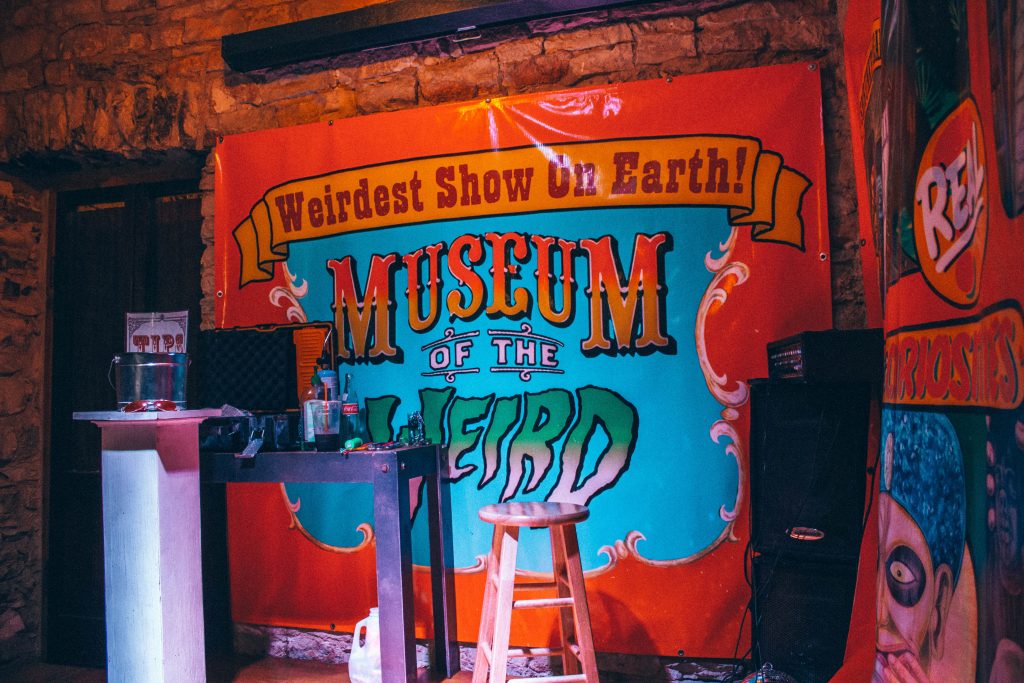 The Cathedral of Junk

One man’s junk is another man’s treasure? The artist, Vince Hannemann, takes this cliche phrase to heart. He’s created one magnificent structure made entirely of other people’s “junk.” I honestly wasn’t sure if this was going to be that cool but I was determined to see it nonetheless.

The Cathedral of Junk is located in a normal residential neighborhood right behind Hannemann’s house in his own backyard. When we pulled up outside, you almost wouldn’t know there was this huge structure out back. His front yard was magnificent in its own way with a beautiful garden. 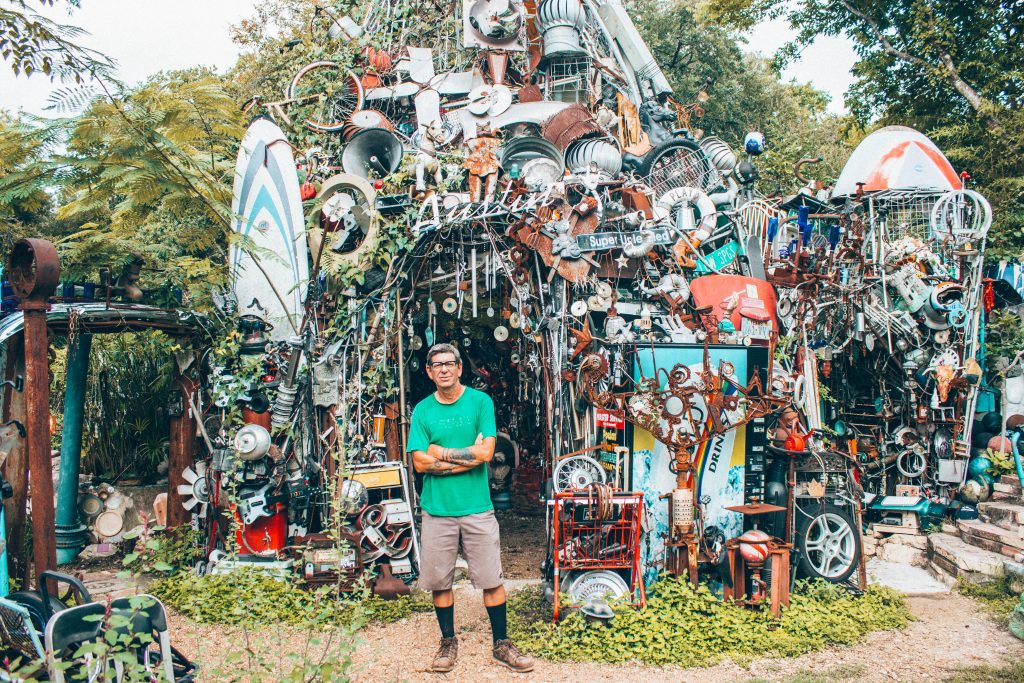 It may look like a pile of junk but as you start weaving your way through all the different rooms and climbing to the top, you realize how creatively it was put together – like things grouped together, areas grouped by color – and how soundly structured the whole thing is. This takes a creative mind but also an engineering one as well.

Hannemann started his creation in his 20s back in the late 80s and he’s been doing it ever since. He said most of his neighbors are okay but some have complained to the city and after an inspection, he was forced to remove some of his structure and rework it.

The Cathedral of Junk is open to the public but by appointment ONLY. You must call Hannemann at 512-299-7413 to schedule an appointment and there is a required donation of $5 (but donate more if you’re so inclined). While he’s very flexible with appointment times, he does not accept appointments on Sundays. 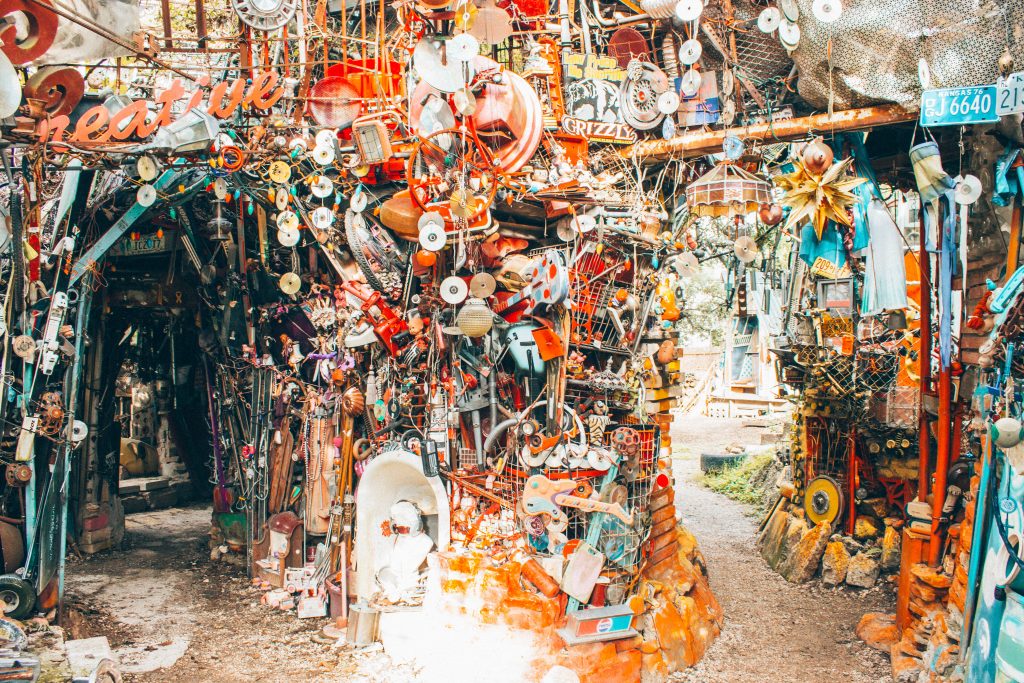 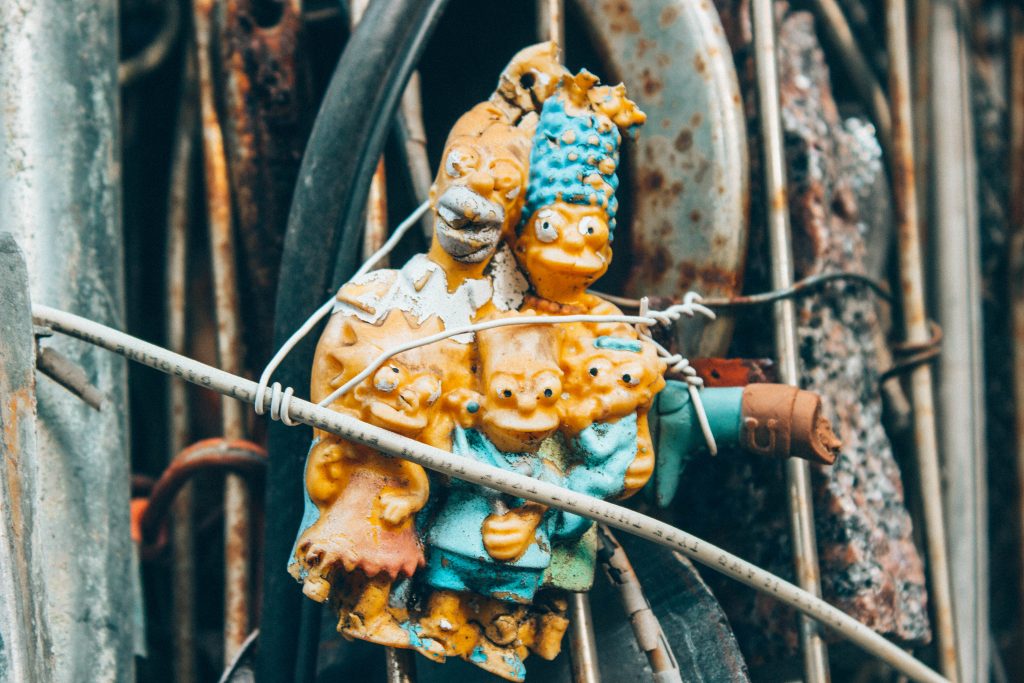 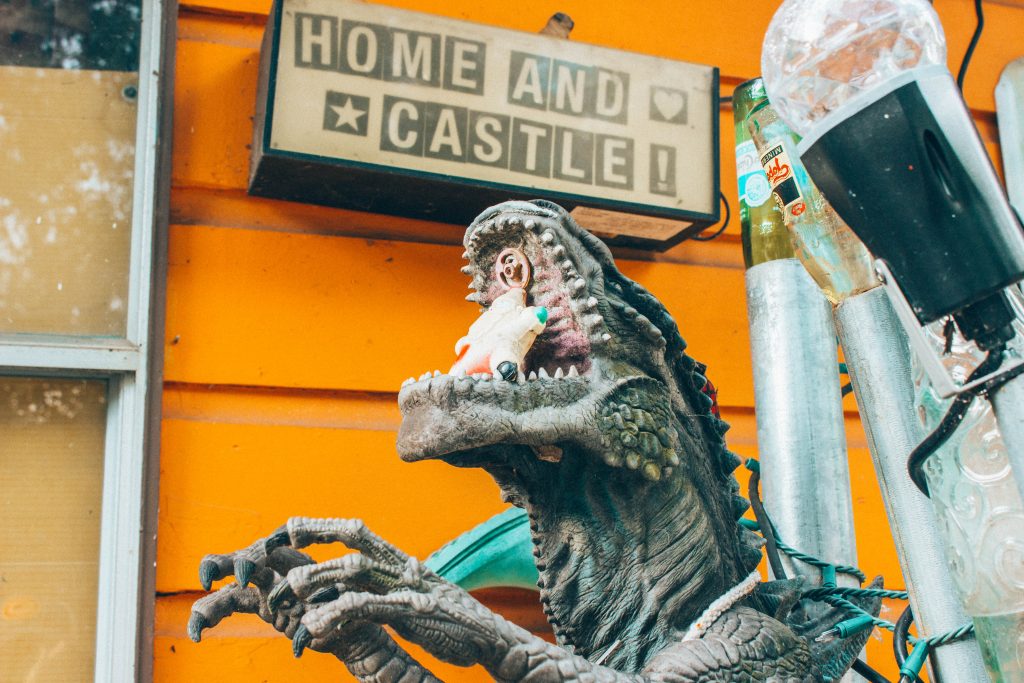 All of the stories are original and heavily researched by the Austin Ghost Tours team and the team are published authors on Austin history as well as Executive Producers of Haunted Texas on PBS TV. That’s quite the list of accomplishments.

When our guide, Dr. John “Madman” Maverick, met us to start the tour, I couldn’t but wonder how this tour was going to go. Was it going to be cheesy or fabricated or what? But, you soon realized just how authentic he, and Austin Ghost Tours, are. He isn’t playing a part – this his is true passion.

Interested in taking a haunted ghost tour?
Address | varies depending on the tour
Hours | by reservation only (Thursday-Saturday)
Cost | $25
Website | https://austinghosttours.com/ 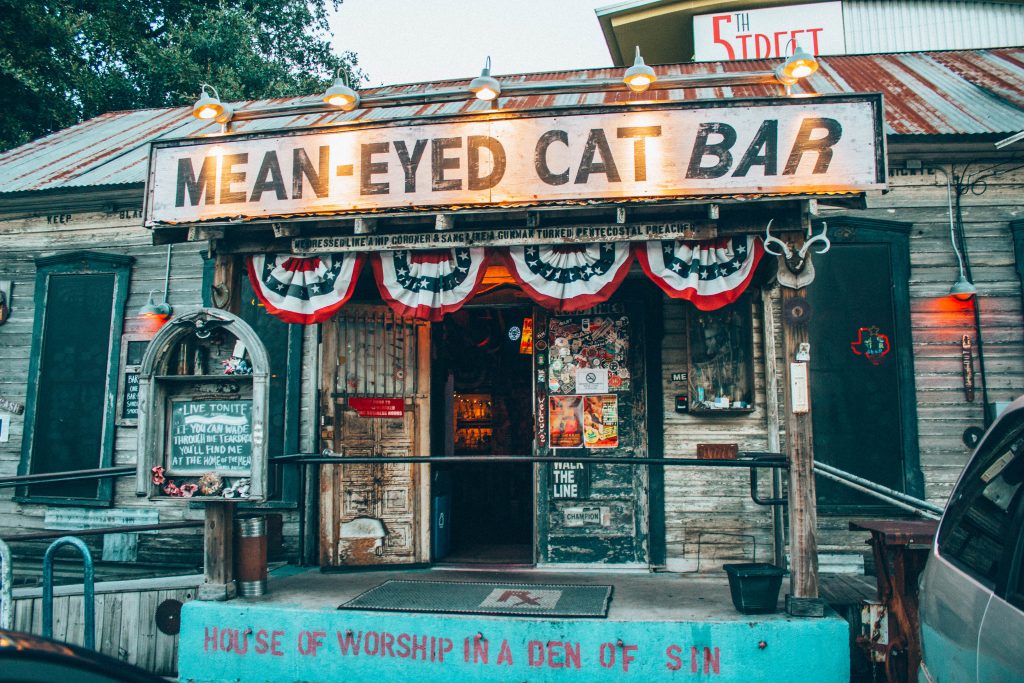 Coming from Nashville where we have the Johnny Cash Museum and where country music just comes alive, I definitely wanted to see the Johnny Cash themed bar called the Mean Eyed Cat. The entire inside of the bar is a dedication to the one and only Johnny Cash. From pictures adorning every inch of the walls to bar stools spelling out song lyrics, they’ve thought of it all.

If you’re wanting to sit outside and enjoy the weather, you can sit on the huge open patio that is sheltered by a gorgeous and overtowering 300+ year old Texas Live Oak tree.

Located away from the heart of downtown but still, very close, this is a must visit. 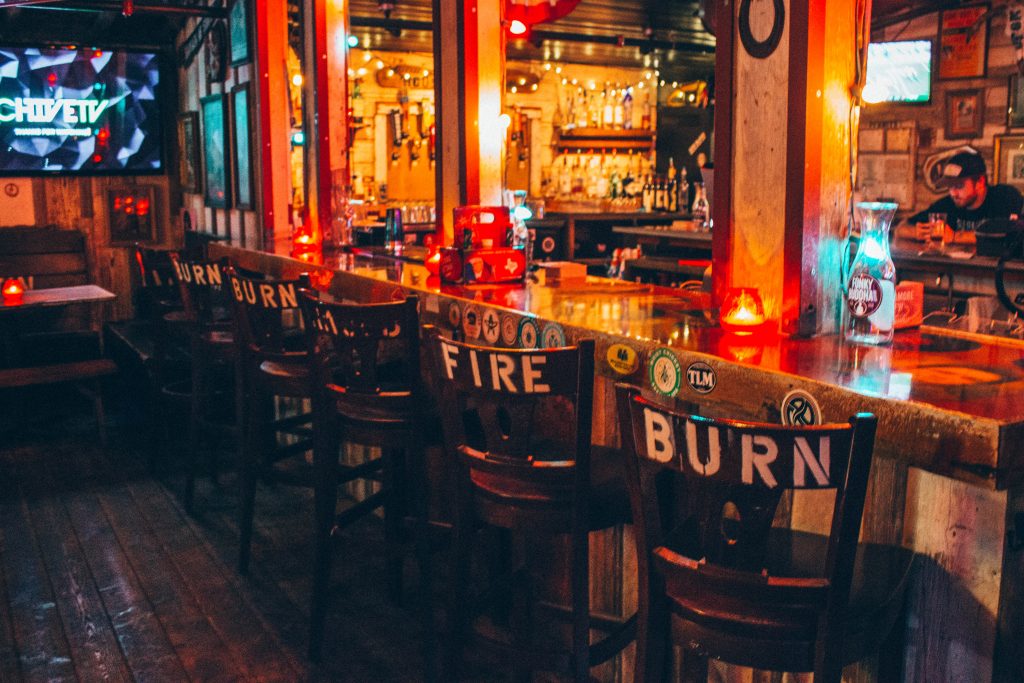 The Bats at Congress Bridge

During the spring and summer, approximately 1.5 million Mexican free-tailed bats migrate to Austin and emerge from under the Congress Avenue Bridge every night. Tourists and residents wait for and watch this unique spectacle every night from March to October.

People start lining the bridge every night well before sunset in hopes of getting a good spot to witness this amazing natural phenomenon. It’s legitimately one of the coolest things I’ve probably ever seen and so hard to put into words. It’s also hard to capture on camera. 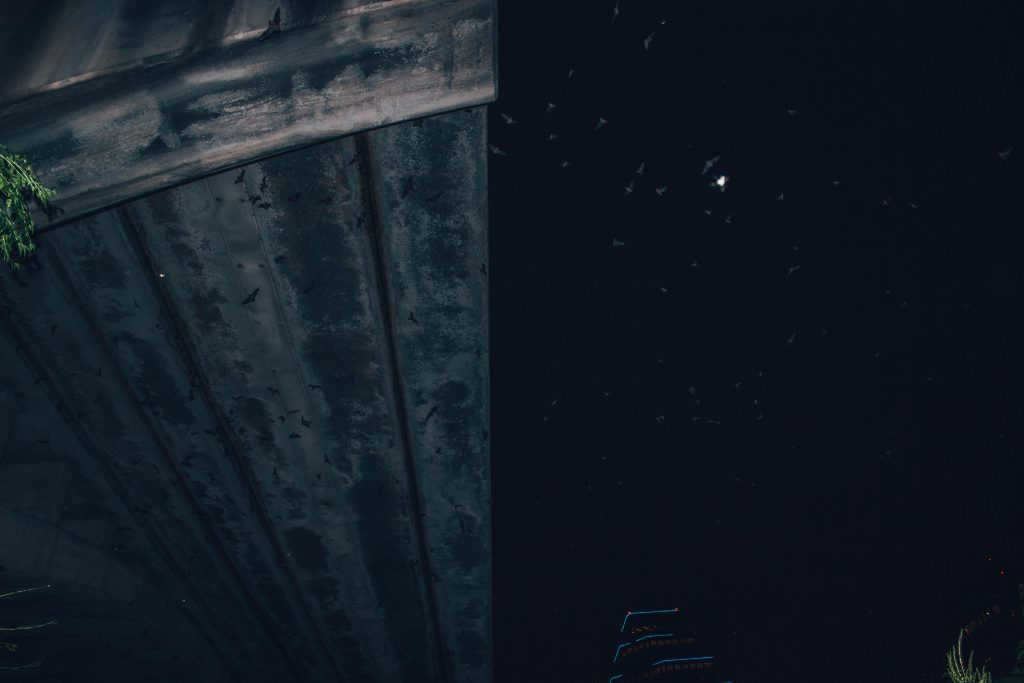 Right around sundown, a few bats (probably thousands once you realize there are 1.5 million of them total) start coming out from the bridge and swooping back in. This is cool enough and goes on for a little while. After a while, you start to wonder if that’s it until they just start pouring out of the bridge in an endless stream of these magnificent creatures. I started to wonder how in the hell that 1.5 million of them fit in the bridge but clearly, it is possible.

See also  9 Weird Things to Do in Dublin, Ireland

Yes, I’m talking about that Eeyore. The city of Austin has celebrated the birthday of the fictional character from Winnie the Pooh since 1963. Eeyore’s Birthday Party usually happens on the last Saturday of April. Attendees arrive in colorful costumes and are entertained by live music and very large drum circles. And, you bet your ass I’m going to attend one day.

The HOPE Outdoor Gallery was a three-story education art project located at 11th & Baylor Street in Austin and was one of the largest outdoor galleries in the country. It offers muralists, graffiti artists, and community groups a chance to display large scale art pieces. It also provided one of the best views of Austin.

Unfortunately, the space was bought out by a developer (this is why we can’t have nice things) in 2018. The gallery closed to the public in January 2019 (although you could still see it but not visit) and is set to reopen at its new location near the airport in the Summer of 2019. Unfortunately, I don’t think that amazing view is going to be the same. I also don’t see how it will be as accessible for people but alas we must have more buildings. 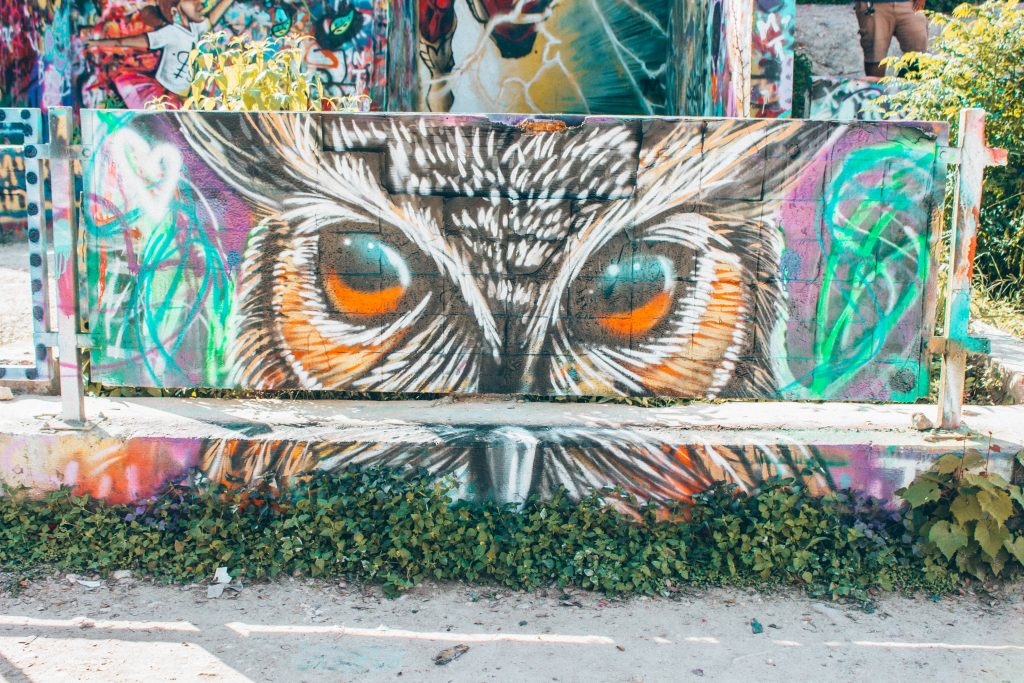 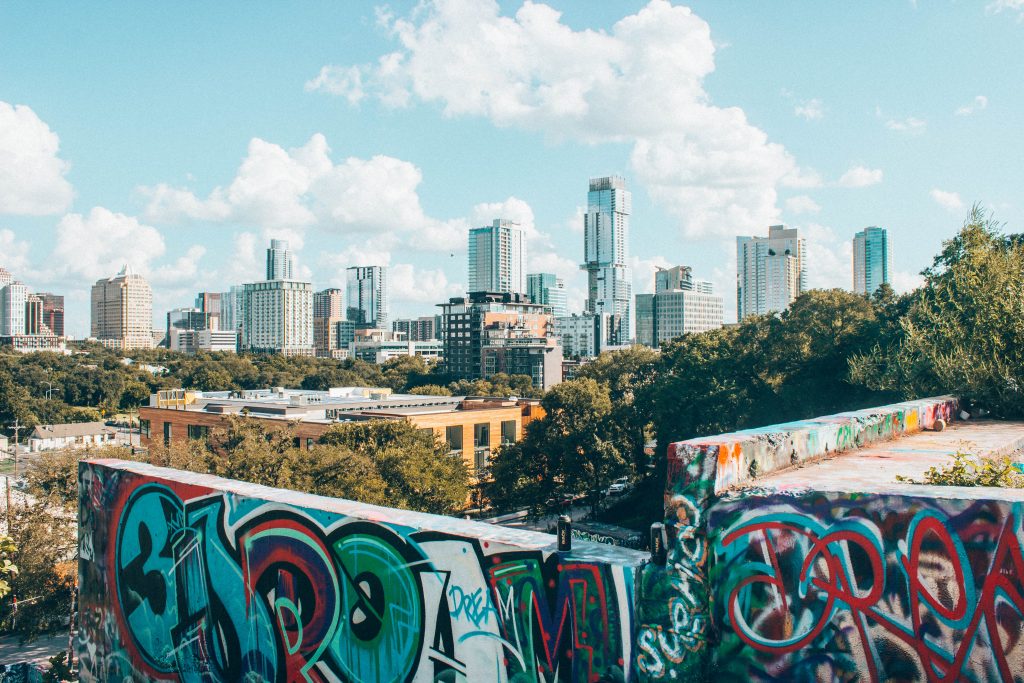 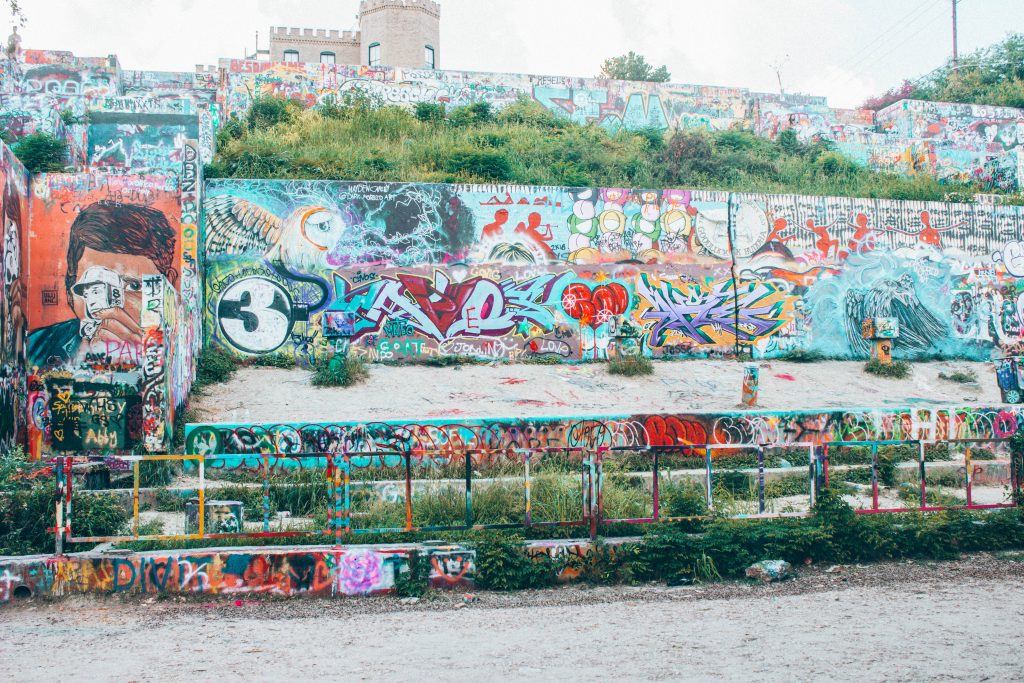 ↓↓↓ What other weird things to do in Austin should be added to this list? Tell me in the comments! ↓↓↓ 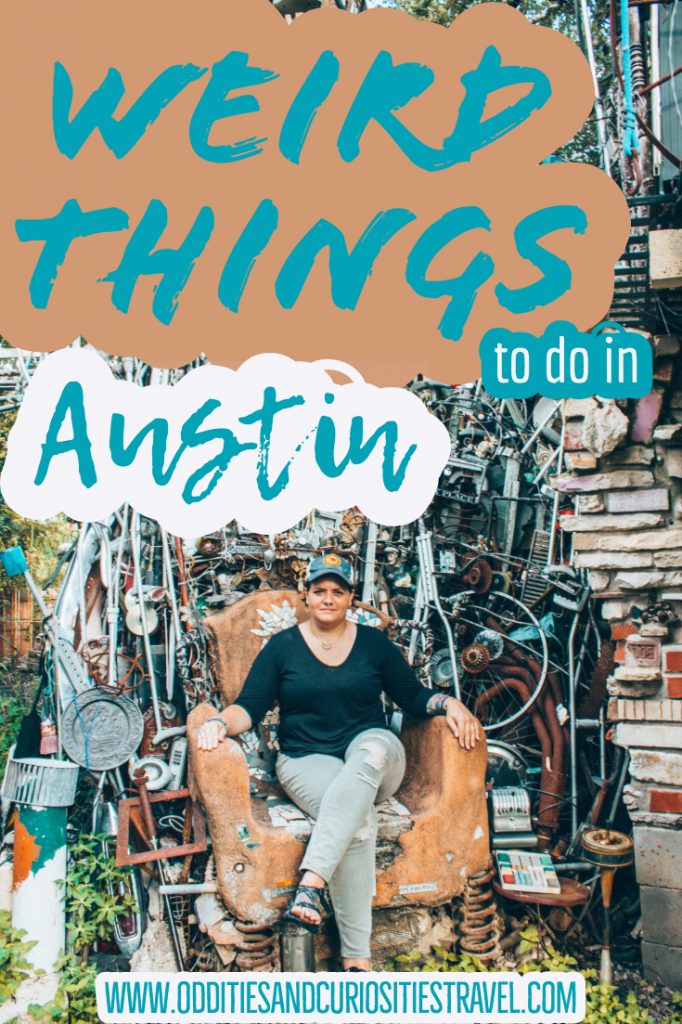 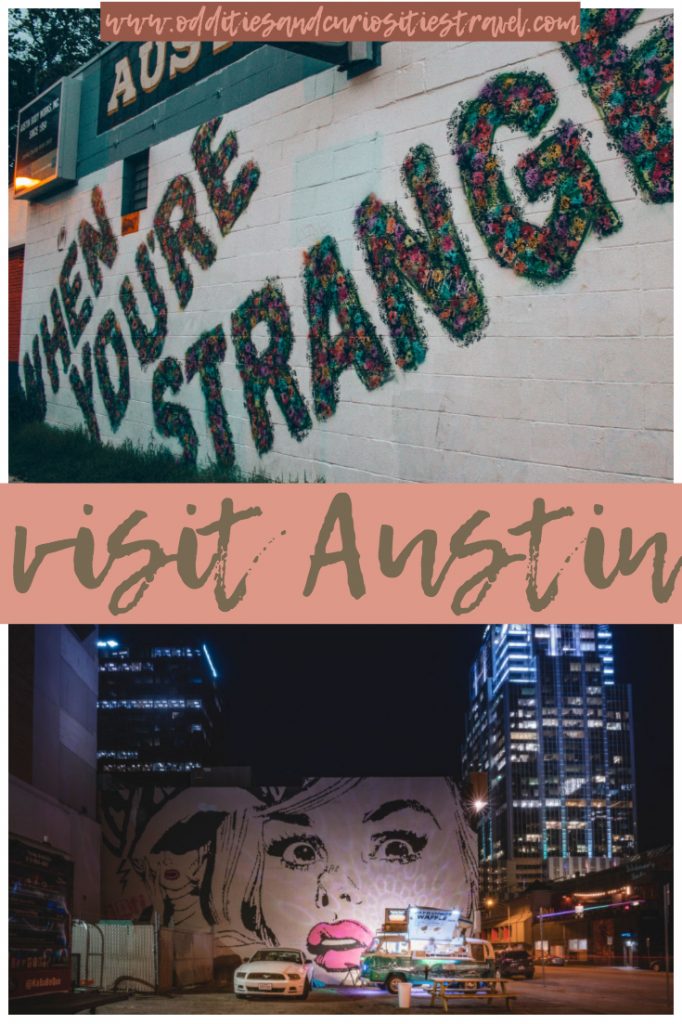 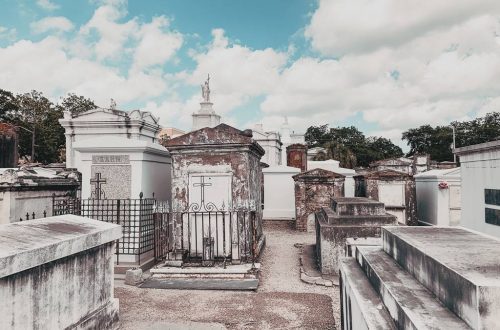 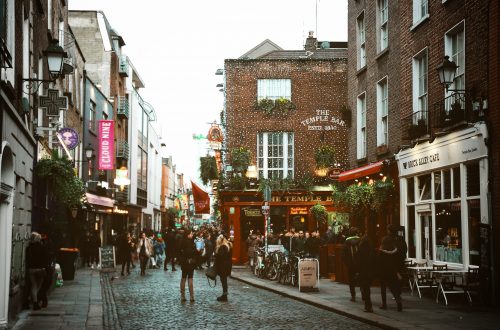 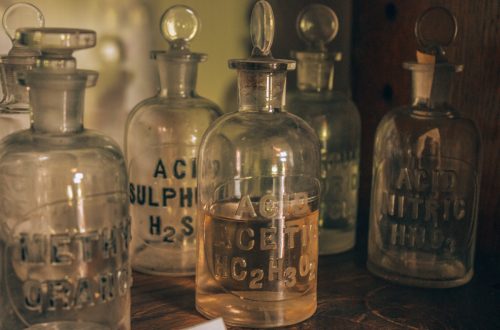 7+ Medical Museums to Visit in the US