Looking for all the new and upcoming horror movies? This list will track the new horror movie releases for 2023 and beyond and will be updated often. Let us know if we’re missing anything!

Below are the horror movies and thrillers that we know are being released (in theaters and/or streaming).

M3GAN is a sci-fi thriller by horror filmmaker James Wan. Allison Williams stars as a roboticist who designs a life-like doll intended to be every child’s best friend and every parent’s closest ally.

When her niece is suddenly orphaned and relinquished into her custody, this roboticist decides to put the M3GAN prototype to good use – with terrifying unexpected consequences.

There’s Something Wrong With the Children – January 17, 2023

From the minds behind Searching comes Missing, a thrilling roller-coaster mystery that makes you wonder how well you know those closest to you. When her mother (Nia Long) disappears while on vacation in Colombia with her new boyfriend, June’s (Storm Reid) search for answers is hindered by international red tape.

Stuck thousands of miles away in Los Angeles, June creatively uses all the latest technology at her fingertips to try and find her before it’s too late. But as she digs deeper, her digital sleuthing raises more questions than answers…and when June unravels secrets about her mom, she discovers that she never really knew her at all.

M. Night Shyamalan is adapting Paul G. Tremblay’s book The Cabin at the End of the World under the title Knock at the Cabin. Dave Bautista and Rupert Grint are headlining the cast.

As a home invasion thriller set in the midst of the apocalypse, Shyamalan’s latest project promises to combine two fan-favorite horror subgenres.

Winnie the Pooh: Blood and Honey follows Pooh and Piglet as they go on a rampage after Christopher Robin abandons them.

Inspired by the 1985 true story of a drug runner’s plane crash, missing cocaine, and the black bear that ate it, this wild dark comedy finds an oddball group of cops, criminals, tourists, and teens converging in a Georgia forest where a 500- pound apex predator has ingested a staggering amount of cocaine and gone on a coke-fueled rampage for more blow … and blood.

In the next Scream installment, the survivors of the Ghostface killings leave Woodsboro behind and start a fresh chapter in New York City. But it looks like things didn’t turn out how they expected.

In this sci-fi thriller, an astronaut crash lands on a mysterious planet only to discover he’s not alone. 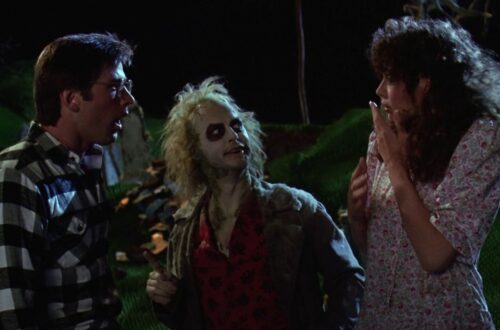